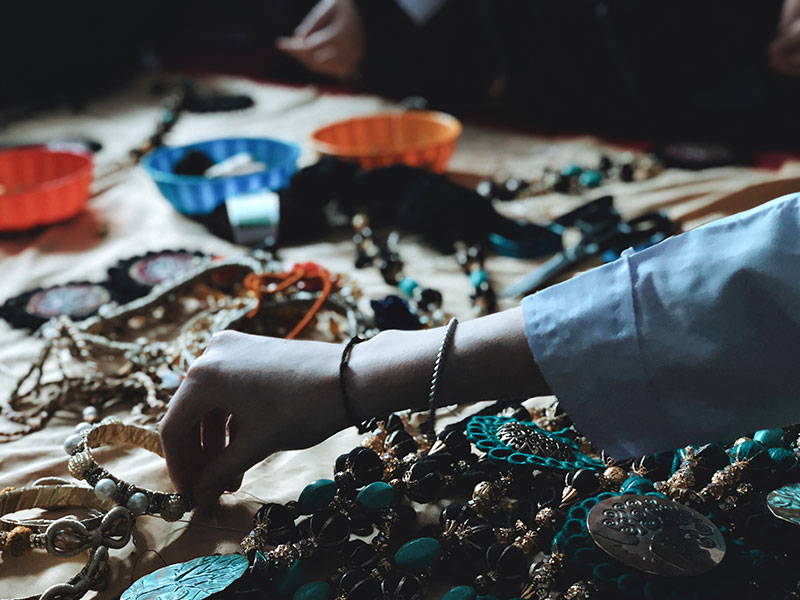 Pakistan is a country with a lot of indigenous crafts from various villages. Each village and city has a language, a stitch, a color which is now becoming extinct.

Craft Stories was created by collaborating with refugee women living in Pakistan, with the goal of sustaining their work and keeping their craft alive. The brand works to protect heritage and support refugee communities by focusing on their skill development and mentoring them to develop entrepreneurial abilities. In turn this leads them to become productive members of society who are able sustain themselves and become independent.

"Every piece of jewelry has a special meaning to me personally because I know the stories of each and every person who has worked on The Craft Stories . They were not artisans and yet they were quick learners and mastered the craft in no time. " – Huma Adnan.

"Stories of hope, fashion, creativity and economic empowerment are the themes we subscribe to when it comes to refugees"

Craft stories prides itself to creates jobs and allows the artisan to become self sufficient and earn a dignified living. The project will continue to function on earned income . The brand originated on the premises of creating handcraft with women force who are otherwise not involved in any activity. They get a purpose in life and they look forward to contributing to their families. The community spirit , coming together as a group to create something gives them a purpose to live. Our team of experts work locally with the refugees ,manage designs , quality , production , supply chain and logistics for refugee made product lines which in turn stimulates local economies.

The handcrafted jewellery is an expression of their personal journey where artisans share their stories in the shape of accessories. Each piece is crafted with the resilience and passion of a heartwarming tale with the perfect balance of quality and design. 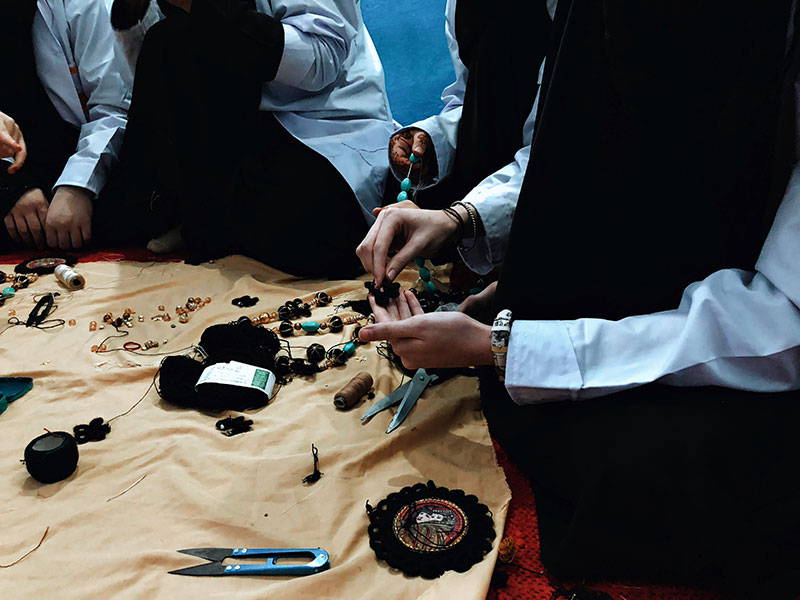 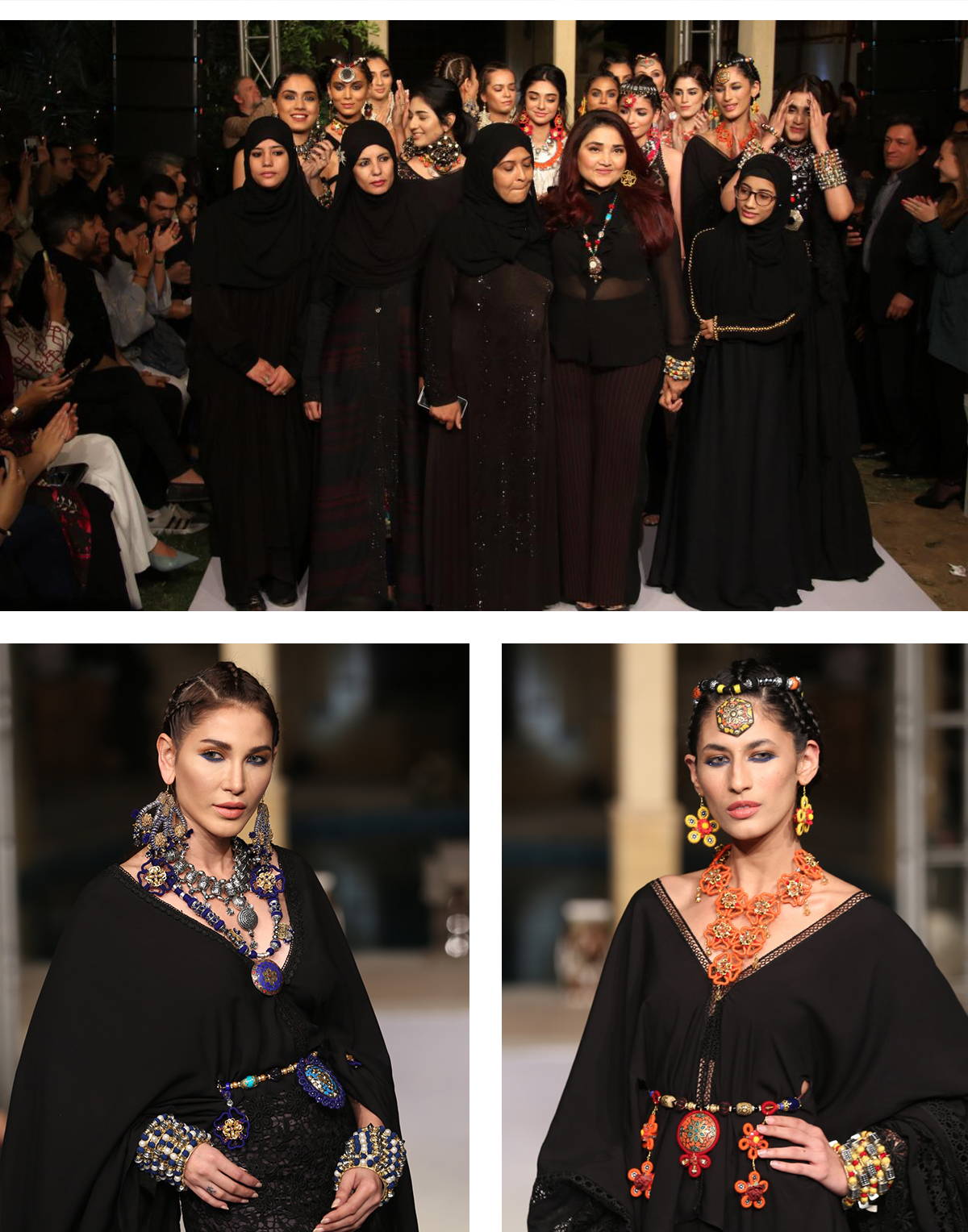 “I first crossed over to Pakistan from Afghanistan 18 years ago. For eight years I lived in Quetta not doing much. Then I returned to Afghanistan before coming back here again, I will now stop cleaning dishes for other people. I have started earning enough for my children. But it is not this handsome earning that matters ' Instead, SHARIFA Bibi is “happy to become a part of the world that looked so inaccessible in the past.” said Sharifa from Qandahar, one of the skilled refugee artisans

Muneeba Noor, a Rohingya refugee in Korangi and one of Sharifa’s students too, said that her family had been living in Karachi since even before she was born. “My father fled from Myanmar with my grandfather when that country was called Burma. It’s great that I have learnt a new craft, which is helping me earn some extra money, which my family can really use as my father has also passed away now,” she said.

“We are so used to considering refugees as victims and weak people, as people who are hungry and in need of shelter – and don’t get me wrong, they are often all these things – but they should not make us forget that these are people like you and me and all of us with potential and skills that need to be nurtured, with hopes and aspirations that have been trampled by history and by events and by other people. And I think that tonight, in this environment that is so different from refugee camps and settings that it would be good to give them honour and dignity as they deserve,” Mr Filipo Grandi speaking in Islamabad at the Craft Srories showcase

“I have always been one to empower and encourage women with the will to follow their aspirations, I believe that we, as fashion influencers, have the potential to start new economic cycles and as my brand already utilizes indigenous crafts from different parts of the world , I love polishing their craft and train their business acumen " Huma Adnan Creative Director Craft Stories

“The single most important thing to remember is that those people are just the same in their aspirations, in their hopes, in their fears, in their anxieties, in their desire for a better life for themselves and their children as all of us except, life’s lottery has been kinder to us than to them. It’s a mark of your collective humanity, for people fleeing their lives, that you all share the understanding but for the Grace of the Creator, our experience could be just the same as theirs.” UN Under Secretary General for Humanitarian Affairs and Emergency Relief, Mr Mark Lowcock